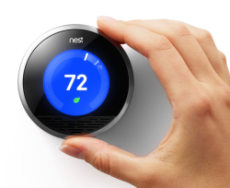 Users took their problem to social media, blaming a mysterious software bug that drained Nest’s battery, and complaining that the thermostat can’t connect to the Internet.

Connectivity, of course, is the main thing in the Internet of Things (IoT).

But what if software updates, unbeknownst to users, go haywire, leaving people -- especially seniors, the ill and babies – inside in the cold? The convenience of the IoT device — that you can remotely adjust the temperature of your vacation homes — means nothing if the thermostat goes bust and the pipes burst.

The New York Times quoted Matt Rogers, co-founder and vice president for engineering at Nest, who blamed a software update from December. He said, “We had a bug that was introduced in the software update that didn’t show up for about two weeks.” In January, devices went offline, he explained.

Richard Doherty, research director of Envisioneering Group, called the Nest fiasco “the worst possible consumer experience imaginable.” All the more egregious is that most of the time “customers do NOT know of the update; or even the purpose of the ‘fix’ it was supposed to deliver,” he added.

Security and privacy
Consumers are slowly but surely catching onto the perils of connectivity.

Take a look at the 2016 Accenture Digital Consumer Survey in which 28,000 consumers in 28 countries were polled on their use of consumer technology.  One result that jumps out is that consumers’ “security and privacy” concerns over IoT devices are much more prominent, compared to 12 months ago, John Curran, managing director of Accenture, told us.

According to the survey, “Close to 70% are aware of the recent hacker attacks using IoT devices, and 42% say it will impact their use and purchase decisions.”

An even bigger surprise is how many consumers said they are going out of their way “to quit or terminate an IoT device or services until they are assured of safety,” explained Curran.  “It’s not a majority, but close to 20 percent of people told us that. It’s a big number.”

The New York Times cites a San Francisco resident named Kent Goldman. “After being put on hold with Nest’s technical support for over an hour, Mr. Goldman went to his nearest Ace Hardware store (while still on hold) and picked up an old-fashioned mechanical thermostat for about $25.”

It’s important to note that today’s CE vendors can no longer depend on the growth of smartphones to pull themselves up. Supposedly a vast Chinese market isn’t going to help them, either.

Curran said, “the most sobering view of where we are today is captured by a sharp drop of the purchase intent of smartphones among Chinese respondents.” Globally, the purchase intent for smartphones is declining. Only 48% of consumers plan to buy a smartphone in the next 12 months. The drop is sharpest in China, down from 82 percent last year to 61 percent this year.

As for IoT devices, Curran said the good news is that those who faced problems in “connecting and using it decreased from 83 percent last year to 64 percent in 2015. The bad news is that still two out of three people are finding it “challenging” to use an IoT device, he said. “Sure, progress is being made, but still we face a lot of work.”

How do you inspire confidence?
Be it a health/wellness device, autonomous car or smart home thermostat, consumers, when using a new category of consumer products, generally worry about two things:  loss of control [over the device], and lack of productivity.

He explained that vendors, first, need to be able to articulate “what data is collected, why it is shared, what benefits consumers are going to get from it.” Communicate this in “clear declarations,” instead of in complicated legalese.

Second, “You should let consumers make a decision, so that consumers are back in control,” Curran said.

Third, “You should be talking about all those steps you are taking – for privacy and security.” Previously, vendors have been reluctant to engage in such conversations, he added.  “That should help alleviate consumers’ concerns and inspire confidence.”

In the following pages, we share highlights of Accenture’s consumer technology survey.