With industry players all battling to "own" customers and their data, the Internet of Things (IoT) market looks chaotic and fragmented.

One sign of the times is the host of industry groups and consortia that have sprung up in recent months and are jockeying to lead the IoT market.

These initiatives include the Qualcomm-led Alljoyn, the Intel-initiated Open Interconnect Consortium, Apple's HomeKit, and Google's Thread.

However, the IoT industry's fragmentation is "somewhat artificial," Silicon Labs CEO Tyson Tuttle told us. Everyone in the industry wants to build its own IoT "ecosystems" and "gateways," and too many people are doing things their own way. But, then, "Who wants five gateways in a home?"

Silicon Labs hopes that the industry will come together at least on the network layer to enable connectivity and interoperability among IoT devices.

ZigBee 3.0?
Google's Nest-led Thread Group is meeting at its campus in Mountain View, Calif., on Tuesday to unveil Thread's IP-enabled low-power network, its protocol and software stack that can run on today's 802.15.4 products (which will be upgraded via software).

Tuttle said the IoT industry badly needs a "low-data-rate, low-power version of WiFi," and Thread plans to deliver it. Silicon Labs is one of founding members of the group, along with ARM and Freescale.

The Silicon Labs software team literally took over the job of "writing the spec" for Thread's new IP-based mesh networking software stack for the Connected Home, he said. The company contributed by developing the golden stack and software that will be needed for interoperability. The results are being unveiled at the group's event as a "Thread beta program" for selected customers and ecosystem partners. 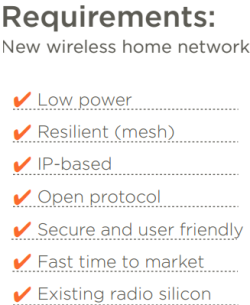 Silicon Labs, a leading analog and mixed signal chip vendor, gained in-depth expertise on the low-power 2.4GHz wireless mesh network technology through the 2012 acquisition of the Boston ZigBee chip company Ember. "We do have the industry's best software team" when it comes to 802.15.4 solutions, Tuttle said.

Thread's IP-enabled low-power, low-data-rate network layer isn't the same as that of ZigBee. It is more like "ZigBee 3.0."

However, Thread Group will not wait for this to be discussed and approved by the ZigBee Alliance. Instead, the group will fast track it as a de facto standard and then bring it back to the ZigBee Alliance for approval. "We just think that it will be more efficient that way."